Once again this year, Cartoomics is confirmed as one of the best Comic Book Fairs in Italy. Since last year, the quality leap is evident and is touched by the three pavilions and the many activities awaiting visitors.

For those unfamiliar with this fair, which is held every year in Milan-Rho Fiera at the beginning of March, it is important to say how you can participate. The price of the whole ticket is € 14.00, but now for a while years it is possible to buy it at Christmas time at € 12.00 or at the same price by downloading the coupon online. Being very large, even if nothing compared to the American ones, I suggest to plan the visit in advance taking into consideration the day you are most interested in according to the events you want to participate in. On the site it is possible a few days before to find them all divided by location and timetable. Who like me then thinks of going there just one day (or even all three), can pre-plan what he would like to do or see. Another suggestion that I can give is to draw up a list of activities to be done (for a fee) and shopping to avoid going to meet a waste of money due to the many temptations present at the fair. It is therefore my advice to face these events with a plan and precise objectives to be able to do well or badly everything you want without “leaving the tracks”. Personally I usually go there from morning till evening and so make do with the lunch bringing it from home, better and cheaper than buying it on the spot.

After a first part of advice, based only on my experience and on how I usually live an event like this, I accompany you in an account of MINE Cartoomics that this year fell on a special day: March 9, the day of my birthday.
We arrived at the fair, me and my mum and my trusty companion of a thousand adventures, in the morning around 10.00 am while our first event was at 11.15 reason why, after a first round scout of stand in search of Funko Pop a good price, we have witnessed in Agorà 3 to three events:
–Star Wars: Act II “We meet again finally” held by the 501st Italica Garrison and Guerrestellari.net in which was shown a roundup of quotes of Star Wars in the world of cinema. Too many to be able to see them all;
–Stefano Bersola, from City Hunter to Max & Cherry Pocket, a short but very pleasant meeting with this incredible singing and his experience in the world of cartoon themes;
–Panini Comics presents “The Eternal Back of the Mutants”, the panel we were waiting for. What I participate each year to find out what will be the year of the House of Ideas. For a detailed report of the same I refer you HERE (available from Wednesday 13).
Between a panel and the other is now lunchtime and then kissed by the sun lunch between focaccia with olives and carnival masks to sugar to start more gritty that never to scour the second part of gadget stores looking for Funko Pop. This year, unlike last year, when I came home with 4 Funko Pop for € 40, the spoils were thin: 1 Funko Pop at € 10. The truth is that I go in search of offers and unless it is something I look for desperately or that is particularly rare or stamped I do not want to spend figures that I normally spend online or in store for Funko Pop perfect, while those at the fair were almost all damaged. I saw real horrors!
To console myself, we headed to another activity that I usually do during the Cartoomics that is the Softair. I must say that I missed the gentleman I was normally meeting, but despite this I decided not to lose heart and even do something different. Instead of some shots with the sniper rifle this year I wanted to try the trio that also included gun and machine gun. It was all wonderful if it had not been that many of the weapons were faulty. I always shoot with the sniper rifle and I always hit the mark so I found it strange that for the first time in my life this did not happen, like many others before and after me. With the gun another story, it worked great but I had never used it. Heavy. Recoil from fear. It was difficult and a real disaster. Miter has been liberating, there is little to do!
Back to the first pavilion, for a cosplay event, we stopped at the Panini stand with the clear intention to buy something even just to have the wonderful bag that was given, however nothing that interested me buy and therefore no bag! Sigh!
Finally reached the first pavilion, and waiting for the Assassin’s Creed event, on the stage cosplay with pleasure we witnessed the “Epicos Live Show” a sort of musical cosplay where the cosplayers danced and sang live giving a new form to be cosplayers. One that I appreciated for the skills shown, better for example of many sang Sanremo Young! The only flaw is the audio, too high. Defect in all events that involved talking cars. Then the event for which we were “We know Assassin’s Creed” has finally started.
A cosplay parade of some of the most beloved Assassins accompanied by their famous phrases. As a number one fan I could not but appreciate, I only wanted to be more cosplay and last longer the show. At the end of it all had been done at 15.00 and since the last event was at 16.30 we used that time between pinball and some matches in the retrogames area between Super Mario Bros and Tekken.
Incredible experience at the stand of “Assassin’s Creed Cosplay Italy” where the guys of the association have built a real animus in which it is possible to “enter”. An experience in augmented reality of 3 and a half minutes in which we are catapulted into the Venice of the ‘400 between channels and murderers and that does not use images of the game, but real images. I was completely estranged and for a few minutes it really seemed to be an assassin myself.
Yet another very entertaining stage at the Shazam stand where in exchange for a photo and sharing on Facebook we received the lightning-shaped pens, and since it was my birthday, even a super heroine cape!
By now it was almost 16.00 and so we headed to the MovieCon space where the Univision Days event was going to be linked to “Fantastic Animals – The Crimes of Grindewald” that we followed with pleasure as the next event for which we had come “Special Event 10 years of Marvel Studios”.
A negative note was the presence of guests who in both cases said more inaccuracies than interesting things as connoisseurs of the two worlds at a very low level . When such events are present large fans and nerds of such vast and famous reality it is very serious to put people to talk about it that they know less than the audience sitting to listen! A positive note was the presence at the Marvel event of Nicola Peruzzi and Mahmud Asrar who held up the level of the panel as the former is a great connoisseur of the Marvel world and the second is nothing less than one of the designers of the House of Ideas and that among other things has given us an indelible memory: a live drawing of Captain Marvel!

Bonus = Interesting and important fundraising for nuclear medicine presented through an exhibition that talks about Marvel heroes and their powers, how they were caused and how these causes are applied to medicine in reality.
Extra Bonus = Having taken the picture with Tony Stark and Doctor Strange, my favorite Marvel characters! So Hot!
In conclusion a beautiful birthday, an incredible adventure and a pride, the nerd, who never dies.
Rating: 4/5

This site uses Akismet to reduce spam. Learn how your comment data is processed. 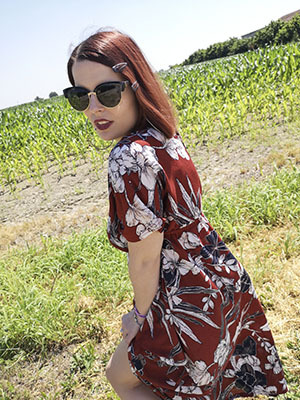 Made in Italy (Milan) since 1988
For collaboration contact me by e-mail
💌info@crisshex88.com💌

Objective: to face the #BlueMonday with joy! A cha

I know Christmas is now over, but I couldn't shari

What is the #INCI? . It's the acronym for Interna